Parker Napp as Puss in Boots in Shrek 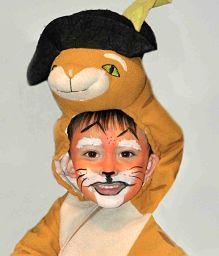 Ours is a personal and professional love story over a decade in the making and deeply rooted in a shared passion for the theatre.  Over the years our numerous pairings as Will Parker and Ado Annie in the Rodgers and Hammerstein classic Oklahoma! inspired us to name our son Parker. We hope to instill upon him our lifelong love of the arts.

Six year old Parker is a seasoned veteran of six CCP productions including The Wizard of Oz, Shrek the Musical, The Music Man, Suessical,The Little Mermaid and Beauty and the Beast.  Parker also originated the role of Baby Santa in Babes in Toyland from 2010 - 2013.

every aspect of theatrical performance and entertainment management.

On behalf of our extremely talented and hard working staff of volunteers, performers and musicians we are thrilled to have been awarded BEST FAMILY THEATRE.

of  “theatrical” hats in Baltimore and around the world — including General Manager, Company Manager, Production Manager, Stage Manager, as well as Performer.  For many years Steve also served as Director of Print Production for several Baltimore area Advertising Agencies.  As Artistic Director, Steve was recognized with back-to-back Best Director of a Musical awards for Charm City Players' acclaimed productions of The Wizard of Oz in 2014 and Shrek the Musical in 2015.

Christina Napp is as equally gifted on stage as she is behind the scenes.  In addition to serving as Company Manager for Charm City Players, she is well known for such outstanding lead roles as Nancy in Oliver!, La Carlotta in The Phantom of the Opera, Ado Annie in Oklahoma!, Carrie Pipperidge in Carousel, Lily St. Regis in Annie, and Sugar Plum Fairy/Gingy in Shrek the Musical  just to name a few.  In 2014 Chrissy was recognized with a Best Performer Award for her performance as Glinda in The Wizard of Oz.